New York Sightseeing when visiting for a second time

We first visited New York during Christmas time.  On that trip, we stayed in Times Square and really enjoyed experiencing the sights and sounds of Christmas in New York.  We did all of the usual tourist things – Times Square, Statue of Liberty, Rockefeller Centre, Empire State Building, Wall St., the Museums, Central Park (along with the zoo) and briefly ventured into Brooklyn. The One World Trade Center Observatory was not open at that time. The kids really enjoyed the experience, especially since their cousins were with them.

We visited New York for the second time this past spring.  Due to weather issues at our origin city, our 4 day trip was cut down to 2 1/2 days.  This time around, we stayed near Penn Station in New Jersey and travelled to New York via train each day.  The experience was quite different to say the least!

Day 1: We landed in Newark late morning.  After checking into the hotel and having breakfast, we decided to take the train into NY.  Once in NY, based on my niece’s recommendation, we headed towards China town.  After exploring China town, we headed to little Italy where we had lunch.  From little Italy, we walked to the Brooklyn Bridge and started walking across.  There was a slight drizzle but otherwise, the weather felt perfect.  We were able to get amazing views of Liberty Island, Ellis Island and the Manhattan skyline.  It ended up being a long day for our younger one and so, once we reached the other side, we decided to call it a day.  We took a taxi back to Penn Station New York and then took the train back to New Jersey.

Day 2:  After breakfast we headed back into New York.  We had purchased tickets for a UN Tour (12:30 pm) as well as tickets to the One World Observatory (4 pm) online, ahead of time.  Since we had some time, we headed to the National Museum of Mathematics where the kids had fun playing with the interactive displays for about 1 1/2 hours.  We then took a taxi and headed to the UN.  The tour was a fascinating experience for the kids.  Seeing the Security Council, General Assembly and other chambers helped us understand the important role the United Nations plays in all of our lives.  After the tour, we spent some time shopping for souvenirs  before heading to the One World Observatory.  Since we had some time before the tour, we decided to have lunch at a Chinese restaurant – Ho Yip close to the memorial.  Afterwards, we headed out to explore the One World Trade Center Observatory area.  Because the kids were young, we could not go to the 9/11 museum.  The advance purchase of tickets really helped.  We were able to go up to the Observatory area fairly quickly.  It was an awesome experience.  The intro video followed by the views were breathtaking!  After the tour, we went to Times Square and spent some time there before heading back to New Jersey.

Day 3: After breakfast, headed to the airport to check out our next destination.

Bottomline: Staying in New Jersey and travelling into downtown Manhattan is not a bad option depending on what you want to see in New York.  If activities around Times Square are your priority, then it is better to stay close to Times Square…. the energy there is unique and cannot be replicated anywhere else.

Note:  Musicals or other shows were not on our checklist and so we did not check out any during either trip. 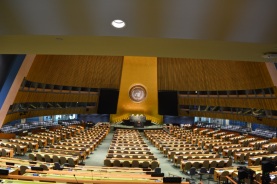