When you are on a looonngg trip, the short trips in-between make your day.

While traveling from India to Canada via Hong Kong, we realised the kids and I had a 7 hr layover in Hong Kong, that too during daytime. Normally, I would have just stayed in the airport. However, life is not normal anymore and we were feeling adventurous.

We were traveling over the Easter weekend and so we had to ensure that there was adequate time for us to travel from and back to the airport — it was a public holiday in Hong Kong and we were not confident about the ease of transportation. To add some spice, I asked my twelve year old to decide where to go and how to get there. He decided – let’s check out Tian Tan Buddha (Big Buddha).

Going through Hong Kong customs and immigration was simple and relatively quick. Once out, we exchanged some USD for the local currency. At the travel desk, we learnt that the cable car to Tian Tan wasn’t in service, so we chose to go by taxi even though it was expensive. The alternative would have been to take the bus.

Taxi at the airport – getting one was a mini adventure in itself. The taxis are color coded and you have to take a Lantau taxi to get to Tian Tan. The first taxi driver refused to take us giving the reason that we weren’t enough people (he wanted 4 instead of 3). We thanked God afterward, because, the next driver was a gem. Although he charged us for waiting, he waited while we explored Tian Tan. This was important because we did not waste time looking for one afterwards (Amazing Race people!).

The drive to Tian Tan was beautiful. You get to see a different, quieter side of Hong Kong. Once we got there, we quickly climbed the steps and soaked in the views (depending on the time of the year, carry water and an umbrella).

Being aware of time, we climbed down and briefly visited the Po Lin Monastery there. We then headed back to the airport.

We reached the airport fairly quickly.  Since we still had about 2 ½ hours to go, we had our lunch in peace at the airport.

Tip & regret – this was our first adventure with a time constraint and we were very conservative with our time estimates. We missed the opportunity to have lunch at Tian Tan and explore the lower floors, which could have been awesome!

Our taxi in April 2017 cost us approximately 550 HKD (which includes waiting time and tips). We definitely plan to go back to Hong Kong again! 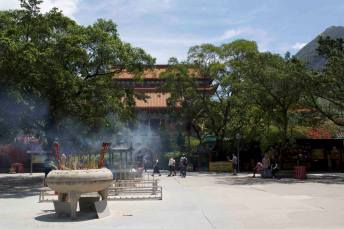 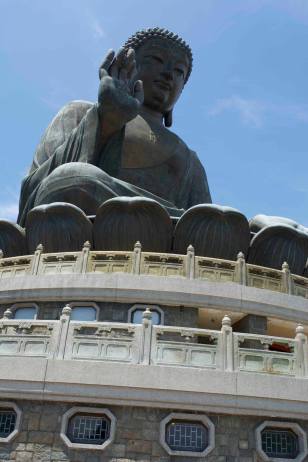